I managed to squeeze in a bit of birding while my dad (from Florida) and aunt (from Texas) visited at the end of September. Luckily, my dad’s almost as enthusiastic about birds as I am, and, well, my aunt was outnumbered (and a good sport).

I first took my jet-lagged relatives to Chapman Elementary School to watch Vaux’s Swifts roost in the chimney. During late August/September, thousands of swifts roost here before continuing their migration to Venezuela and Central America. This natural event attracts thousands of Portlanders who flock to the school to picnic, slide down the hills on cardboard, and witness the awesomeness of nature. It’s quite the sight. 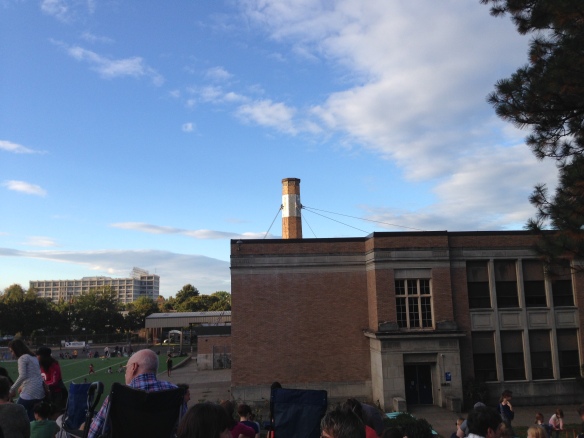 I forgot my camera AND my binoculars, so I had to rely on my eyeballs and iphone for adequate, but blurry documentation. At sunset, the birds swirl into the chimney, resembling a cloud of smoke. I’ve attended in years past, and this year there were fewer birds it seemed, and they waited a bit longer after sunset to make their descent. I wonder what’s up with that?

The next day, we headed to Cannon Beach to check out birds at Haystack Rock. The usual suspects were present: cormorants, gulls, oystercatchers, pelicans, murres, and we spotted one female Harlequin Duck. The Oregon coast did not disappoint, we caught glimpses of whales breaching out in the sea as well. Thrilling times!

A major part of their visit included a trip to Crater Lake. The weather conditions were absolutely perfect.

As were the views of the Red Crossbills!

Since these turned out best, here’s too many pictures of Red Crossbills. Such fascinating bird faces.

I’d hoped we would see Clark’s Nutcrackers, instead we saw Gray Jays. 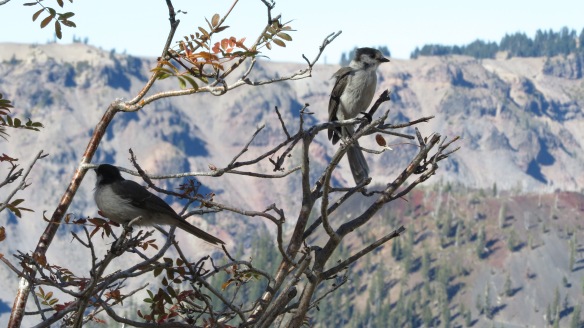 And hawks! A Red-tailed Hawk ( I believe).

While hiking Watchman’s Peak, we saw a smaller, soaring hunter. I’m pretty confident it’s an Accipiter based on the shape of the wings and streaked underside. I first thought Cooper’s (based on perceived relative head size), but the curved leading wing edges make me feel better calling it Sharp-shinned. 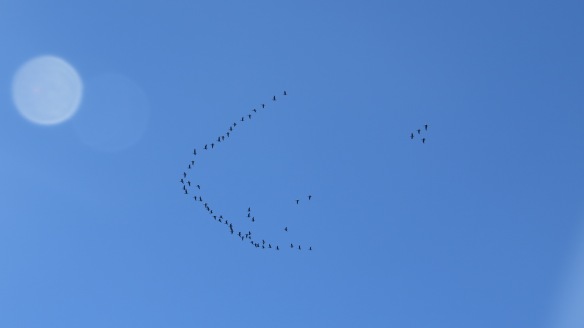 Back in Portland, our final birding destination was Leach Botanical Gardens. I took a Beginning Birding class here months ago, but the class was indoors and late at night. I looked forward to seeing the grounds in daylight.

We were greeted by a flock of Cedar Waxwings.

Followed by a singing Song Sparrow.

And hummingbirds buzzed and zipped around, creating quite a scene.

As we departed the gardens, we were fortunate to see (and hear) a raucous pair of Pileated Woodpeckers. Here’s one of my dad’s pictures.