Original weekend plans for Indian Heaven Wilderness thwarted by rain, my boyfriend and I headed east instead to explore a new state park, celebrate our 50th monthiversary, and see what birds we could find!

The rugged, dry-side Cottonwood Canyon State Park, established recently in 2013, is rich in sagebrush, wildlife, stunning canyon views, and plenty of open space to explore at over 8,000 acres making it the second largest state park in Oregon (after Silver Falls). Only a 2-hour drive from Portland it’s equipped with primitive campsites, but we opted for backpacking and solitude from civilization.

With our packs suited up, we headed out. We chose a campsite along the John Day River with a large basalt canyon on one side, and sagebrush filled hills on the other. Sweet spot! 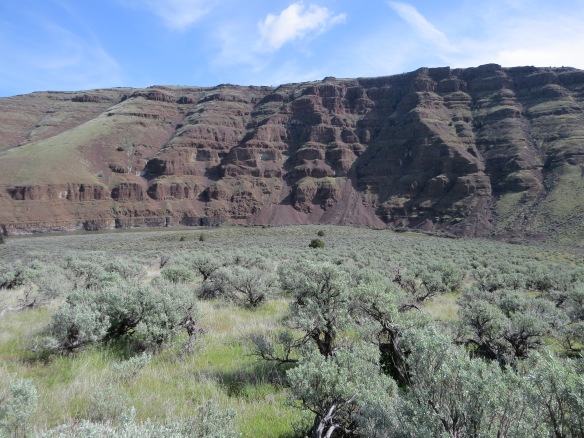 I considered changing this blog’s title to: “Chasing Meadowlarks.” Because that’s how I spent much of my time. They were everywhere! And nowhere…sneaky birds were easy to hear, hard to see. What bird?…Where?

The bird’s yellow markings blend in nicely with the flowers in bloom. 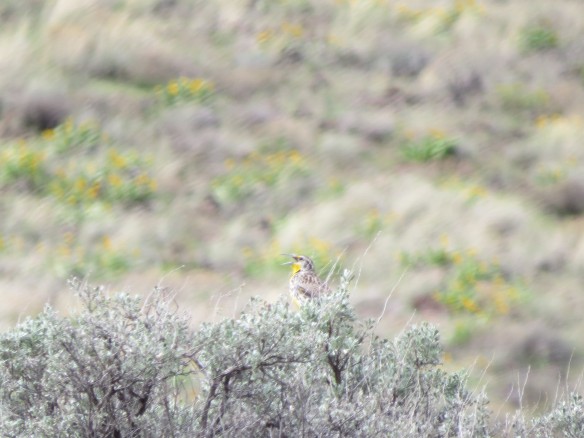 It was neat to wake up in camp listening to their captivating calls. More than meadowlarks, I caught glimpses of a few new birds too! I had a hard time wrapping my head around some of these, seeing new birds can be a stunning experience.

The Say’s Pheobe was a cool sighting, the bird hovered in the wind above the branch a couple of times before quickly flying away. Lacking confidence ID-ing this bird on my own, I conferred with WhatBird and folks weighed in noting the “coloration on the undersides of the bird – the uniformity and distribution of this rufousy-brown color is a very good field mark for Say’s Phoebe.” Field guides also mention it “wags its tail when perched” which I hadn’t known to look for before, but I do now!

I figured out the Townsend’s Solitaire on my own. A type of thrush, in the family Turdidae. The long and slim TOSO has a drab grey color overall, but a distinctive white eye-ring that really stands out. Also, Sibley mentions, “in winter almost always found among juniper trees.” Indeed, that’s precisely where it perched.

I watched it for a while as it swirled around the juniper catching insects in the air.

Another bird I braved to ID on my own was this little brown fella. The lack of belly streaks ruled out most of my guesses (Savannah Sparrow, Lincoln’s Sparrow), not much stands out. Then I read on Cornell about the “bird without a field mark,” the Brewer’s Sparrow, and it seems to fit. Another clue is the habitat, “notable for their reliance on sagebrush breeding habitat” and “most abundant bird across the vast sagebrush steppe” sealed the deal for me. I’m curious about this bird’s bill, it seems to be a bit crossed. 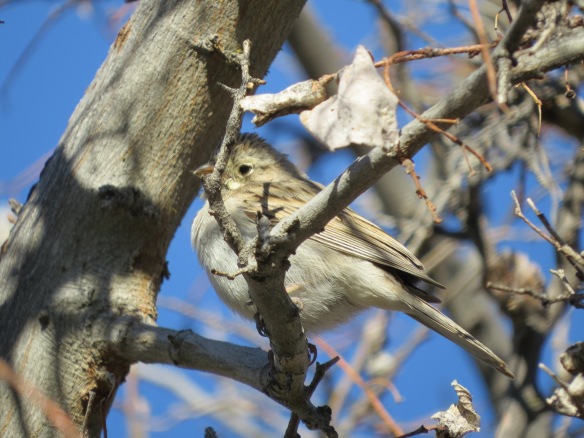 A goose nest in the cliff!

I had hoped to possibly see a Golden Eagle, Prairie Falcon, or perhaps resident upland gamebirds, the Chukar Partridge or Ring-necked Pheasant, (or bighorn sheep!) but no such luck. According to Wiki, the Bullock’s Oriole and Lazuli Bunting are summer visitors to the park, but the searing summer heat will probably keep me away. All in all it was a great trip!

And wouldn’t you know it, I got the best view (and photos) of the Western Meadowlark on the drive back when we stopped by Marryhill Stonehenge, in Washington. 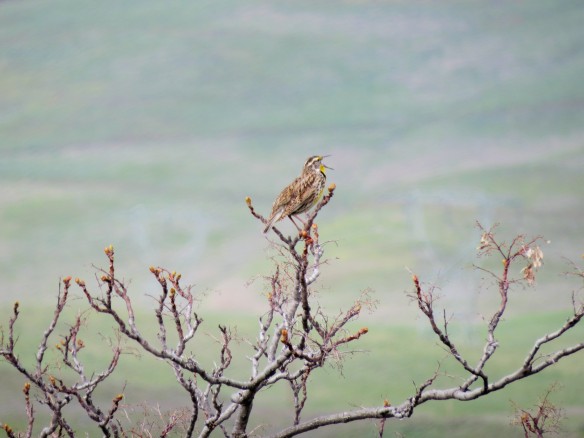